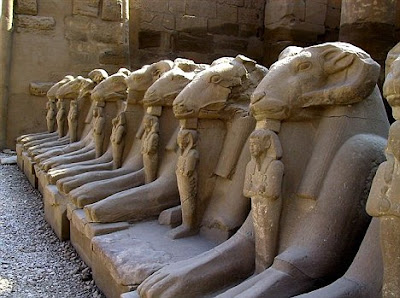 My recent trip marching through the Middle East has resulted in an incredible amount of new content. There is so much material, so to speak, that it is almost impossible to comprehend. My weirdest experience was at Kom Ombo town and its associated temple where I was held up by Ali Baba and Forty Thieves! O What happened is this! A masked man offered me hospitality and a dinner of pheasant and Egyptian bread known as Aysh Levantine! Then the militants marched into the little house along the Nile's shore and gathering up me and my pack paraded me though the streets, shouting slogans and praising Allah! O Allahu Akbar they shouted! We've caught the American dog of MySpace fame! Some carried pistols and others carried AK-47 automatic rifles! Bandaging my eyes and tying up my wrists I went through the streets, crying tears as I thought I'd never see my children again!

Then something happened...Orion rose in the East and they became mollified! They shouted less and grew pacified. After taking all my money they said I was their protector and should stay in the Temple Complex! O I stayed there all night as the stars passed overhead including the Dioscouri of my Mother's birth known as Gemini and Aquarius of my Father! O Jupiter was high in the Sky! O Khonsu appeared along the face of the Moon's limb! O Khonsu be with me I wept! O Khonsu is the God of safe travels in Egyptian mythology! Somehow it became True! I was saved!

At Dawn the Call to Prayer sounded from Mosques all along Nilos' Grand shore! O There were Five Echoes of Divinity that Night as the muezzins called out, each competing with the other to sound more mellifuous and Holy!

Kom Ombo is Holy to Khnum the God of the Potter's Wheel who is Rumored in Legend to be the Architect of Man! While resting I had a dreamlike vision and I heard Ptolemy whispering to me, he is the pharaoh that built this great temple in ancient Nubia, just north of Aswan! He said this! O Michael, Michael it must be you! O tell the great man in Rome this! O No More War in My Name! O Michael I am of Comet Kohoutek O man of 1973! O Tell Hosni this my Son! Wear the Blue Crown! Be the Lord of War and Peace who Advances Mightily from Armant-is-Forever-Holy-to-Montu! O Hosni do this! Be of the Great King's List at Abydos-is-Forever-Pure-to-Seti-the-Father-of-Moses! O Advance Hosni! Call Ptolemy in the Stars! O Elephants and Horses Ptolemy Soter!

Anyway, this is a tiny piece of my story which I am relating to my sister who writes for a Washington D.C. newspaper! The saga went on for months and months all over Egypt and Palestina Romanorum and Arabia (Felix)! I'm back in Israel is Forever because I am thinking of the Temple Mount in Jerusalem...it's kabbala.

Congratulations to the Green Bay Packers of Wisconsin Cheese Fame and Cal Alum Aaron Rodgers. I'm also an Alum of U.C. and I have a shirt that has the atomic number of Berkelium (247) in honor of Chancellor Seaborg and E.O. Lawrence and the Alvarez's and their ilk including Dr. Townes who is of the laser.