Dementia Onset Appears to Be Delayed through Education: More Support
> 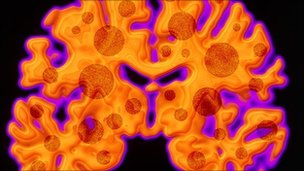 People who stay in education for longer appear to be better able to compensate for the effects of dementia on the brain, a study suggests.

A UK and Finnish team found those with more education were as likely to show the signs of dementia in their brains at death as those with less.

But they were less likely to have displayed symptoms during their lifetime, the study in Brain said.

Experts said scientists now had to find out why the effect occurred.
Related stories

Over the past decade, studies on dementia have consistently shown that the more time you spend in education, the lower the risk of dementia.

But studies have been unable to show whether or not education - which is linked to higher socio-economic status and healthier lifestyles - protects the brain against dementia.

// posted by neurofuture9:16 AM permanent link