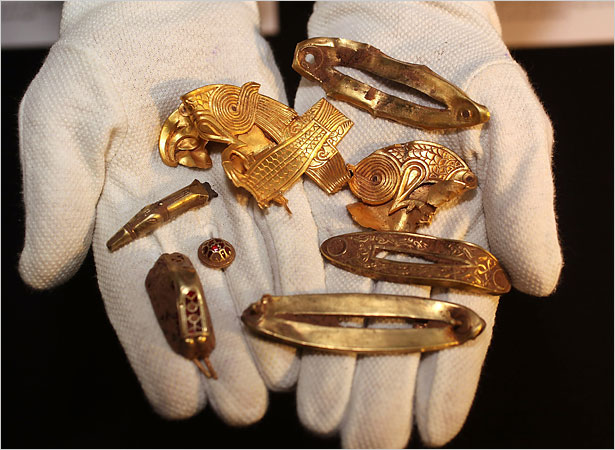 An amateur archaeologist/treasure hunter in England has unearthed a massive 7th century hoard of gold objects, dating to the country's Anglo Saxon period and lying in situ in the kingdom of Mercia, one of the 7 Anglo Saxon wards (from which is obtained the word warden). Mercia in Old English means 'boundary folk' and may refer to those sandwiched between Wales and the main body of Angle and Saxon invaders. You may recall last year's find in Germany, also by someone walking around with a metal detector. The objects include shoulder-fittings for cloaks (as one might see on the Bayeaux tapestry) and gold inlays for swords and shields.

What was the English of the period like? Let's see. Below is the first 20 lines of the Finnsburgh fragment (dated to between 300-700 C.E.) an oral poem... The known piece is only about 50 lines long and does not specify which tribes or peoples are involved in a battle, but apparently Hnæf, the person referred to in "Then spoke the young and warlike king", elsewhere known as a Danish prince (in a reference in Beowulf), is attacked at a place called Finnsburuh "Finn's stronghold." According to the context in Beowulf, this is apparently the hall of his brother-in-law Finn, ruler of the Frisians, located on the coast of the present-day Netherlands - where he has come to spend the winter. Hnæf observes that what he sees outside "is not the dawn in the East, nor is it the flight of a dragon, nor are the gables burning". What he sees is the torches of approaching attackers. Hnæf and his sixty retainers hold the doors for five days, without any falling. Then a wounded warrior turns away to talk to his chief (it is not clear on which side) and the fragment ends...the cause of the fight nor the outcome are known.

J.R.R. Tolkien, one of the foremost Anglo-Saxon scholars of his era, wrote a critical review of this fragment and related documents known as Finn and Hengest. With eventually up to 1500 items expected to be recovered, scholars are hoping that this archaeological discovery will revolutionize the understanding of early Medieval English nobility and burial practices and also illuminate the practices of related groups in Northern Europe and Scandinavia.

// posted by neurofuture9:36 AM permanent link