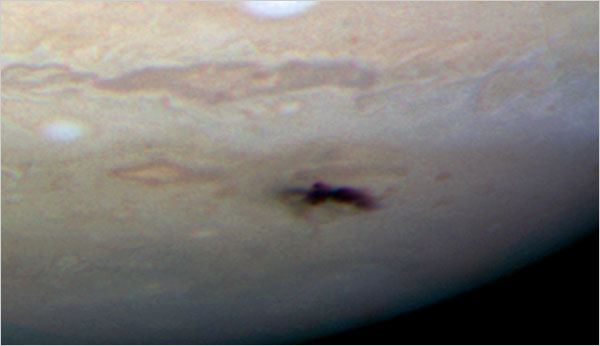 Last Sunday, a previously uncharted object smashed into the planet Jupiter, leaving an impact scar the size of the earth. First spotted by an amateur astronomer, Anthony Wesley in Australia as a dark speck on Jupiter's flank, JPL scientists followed-up and confirmed that a strike did take place. In 1994, scientists had predicted that comet Shoemaker-Levy 9 would impact Jupiter, but in this recent case there was no advance warning.

The object most likely was a comet.

Since the event, a debate has ensued over whether Jupiter is a help or a hindrance to life on earth. Is the planet a cosmic catcher's glove, sweeping up errant objects with its size and gravity? Or, on the other hand, does it's gravity turn harmless objects on safe trajectories in the outer solar system into wild pitches that careen into the batter's box of the inner solar system?

Every so often, ancient comets that exist in an archive at the extended limits of the solar system known as the Oort Cloud - which reaches to approximately 1-light year from the sun, hurdle inward toward the planets.

Past impacts on Earth include the Yucatan event, Meteor Crater in Arizona, and the Tunguska object. If not for our biosphere, which erases signs of planetary damage naturally, Earth's surface would more closely resemble the moon.