The author Gene Wolfe, an Industrial Engineer by training, invented the machine that produces the healthful Pringles potato chip.

In his spare time, he wrote science fiction and started accumulating all of the possible literary awards in the field.

Some authors (see the bio above) regard him as one of the best prose stylists writing in the English language today - due to his ability to insert clues into his text and obscure circuitous references to them throughout the text, even in separate volumes, visible only to the shrewd puzzle-solver. Indeed in this regard, he resembles Dan Brown. 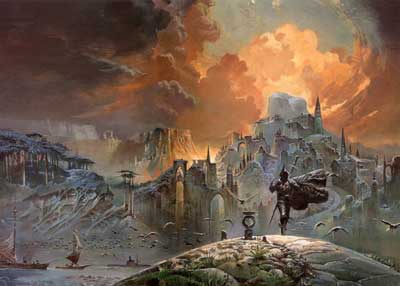 In addition, he created a completely different fictional universe - and pulled it off believably - an accomplishment akin to Tolkien, George Lucas, and Roddenberry, though it borrows heavily from the early Medieval Greek and references terms seen in works such as the Strategicon, Procopius' Secret History and the document of Late Roman officialdom the Notitia Dignitatum, while also mastering principles of physics yet undiscovered, but at the time of writing, are in the process of being forgotten by a decaying civilization.