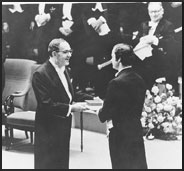 Herbert Simon on the Cognitive Input into literary theory. Herbert Simon (bio) was a very interesting intellect. He had a vast range of interests and practice, including management theory, computer science, economics, machine-thinking, semiotics, and even literature...and is hugely cited. Along the way, he was awarded a Nobel prize in Economics and the John Von Neumann Theory Prize.

However, he is not easily pigeonholed into one or even two disciplines. I first was introduced to his thinking in a management theory class in a master's program, then had a very liberal dose in doing the literature review for a dissertation. One of the ways to handle "chains of data" is to kind of make decision trees using the seminal ideas of a particular work scratched on a 3 X 5 card (with the bibliographical info on the back) and then spread the trees out on the ground by laying out the cards in arrays - helpful in visualizing the data and who influenced whom. These chains can get pretty long.