A Letter of Marque
>

Piracy was in fact, legal up to 1856 as authorized by both France and Britain, and the United States, via the issuance of a letter of Marque to a shipowner.

This was a document (as below) that set forth the rights and privileges of the shipowner's representative, the captain, to seize such property as was documented in the letter. 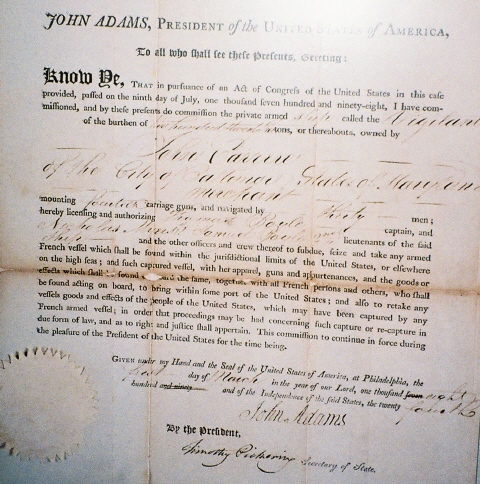 Letter of Marque issued in the name of U.S. president John Adams with respect to seizure of French mercantile property, by the U.S.S. Vigilant

If a ship was interdicted by a third party Navy or even the Navy of a party that was signatory to the treaties that established the policy, then legally there was no recourse for the owner of a ship that had its property seized.

In fact, since the U.S. was not involved in the treaty that settled the Crimean War, made famous by the Charge of the Light Brigade, the Constitution still authorizes the issuance of letters of Marque to privateers, a process which is supposed to be overseen by Congress. In practical effect, the Executive branch has long been in control of asymmetrical means of troubling rival nations.

In recent years, the role of privateering has contributed to the development of the field of private equity, particularly in the form of the hostile takeover as practiced by Carl Icahn and others including the fictitious Gordon Gekko. Legislation has removed some of the incentives that existed in the 1980's and early 1990's, the Golden Age of the takeover, by minimizing the ability to coerce target boards by the adoption of measures such as blanket antidilution provisions, poison pills aka shark repellent in corporate bylaws, and restrictions on collecting "greenmail." Nevertheless, privateering has contributed to the private capital ethos.