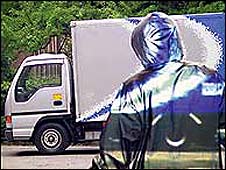 Another possible Nobel prize for the trophy case?

Researchers at the University of California at Berkeley have developed a material that can bend light around 3D objects making them "disappear".

The materials do not occur naturally but have been created on a nano scale. The material could one day be scaled to make invisibility cloaks large enough to hide people.

The findings, by scientists led by Xiang Zhang and Ortwin Hess in the UK were published in the journals Nature and Science.

Add it to the list of achievements of the honored faculty.

If the theory is turned into practice(see article), this is a Star Wars-caliber breakthrough.

It could be rolled out in the Big Game with Stanford in the form of "the invisible ballcarrier" - more exciting than plays such as the fumblerooski to say nothing of vast commercialization opportunities.