Scientists exploring the asteroid belt with instrumentation have found an asteroid that contains the igneous (volcanic)rock basalt. Basalt forms from magma that is subject to tidal flows of gravity in a large body or radioactive decay. The analysis suggests that either a new class of asteroid has been found or that perhaps, remains of a planet have been found. 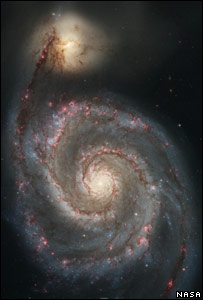 In other news, Google launched Google Sky, organizing and making the heavens accessible like Asimov's Encyclopedia Galactica. However, this digital universe exists entirely within the bounds of clustered server farms. Given additional computational power, telescopic reach, and granularity - maybe there will be no need to travel to the stars - when it can be accomplished digitally, and the 'hyperspace' algorithm reduces the conceptual distance like a needle through folded fabric. Traveling faster than light then, is really the wrong question to ask in discovering the solution.