Music and Your Brain: The Impact
> 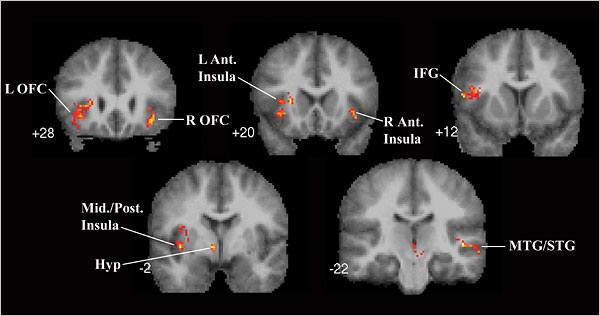 As you listen to music, your brain reacts in different ways. With PET and MRI images now capturing the action, you can see what you hear.

“Listen to this,” Daniel Levitin said. “What is it?” He hit a button on his computer keyboard and out came a half-second clip of music. It was just two notes blasted on a raspy electric guitar, but I could immediately identify it: the opening lick to the Rolling Stones’ “Brown Sugar.”

Then he played another, even shorter snippet: a single chord struck once on piano. Again I could instantly figure out what it was: the first note in Elton John’s live version of “Benny and the Jets.”

Dr. Levitin beamed. “You hear only one note, and you already know who it is,” he said. “So what I want to know is: How we do this? Why are we so good at recognizing music?”

This is not merely some whoa-dude epiphany that a music fan might have while listening to a radio contest. Dr. Levitin has devoted his career to exploring this question. He is a cognitive psychologist who runs the Laboratory for Music Perception, Cognition and Expertise at McGill University in Montreal, perhaps the world’s leading lab in probing why music has such an intense effect on us.

“By the age of 5 we are all musical experts, so this stuff is clearly wired really deeply into us,” said Dr. Levitin, an eerily youthful-looking 49, surrounded by the pianos, guitars and enormous 16-track mixers that make his lab look more like a recording studio.

This summer he published “This Is Your Brain on Music” (Dutton), a layperson’s guide to the emerging neuroscience of music. Dr. Levitin is an unusually deft interpreter, full of striking scientific trivia. For example we learn that babies begin life with synesthesia, the trippy confusion that makes people experience sounds as smells or tastes as colors. Or that the cerebellum, a part of the brain that helps govern movement, is also wired to the ears and produces some of our emotional responses to music. His experiments have even suggested that watching a musician perform affects brain chemistry differently from listening to a recording.