There is an allusion to the Six Million Dollar Man (plus MI) on the home page. I can just barely remember it, except the beginning "we can rebuild him, we have the technology" section.

In case you forgot, I found this: 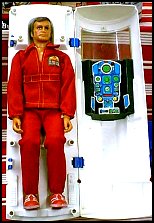 The aircraft seen crashing in the show's opening sequence was an M2-F2, a "flying body configuration" built by Northrup. The audio sound effects are from a crash that occurred on May 10, 1967, at Edwards Air Force base in California (although the dialog heard was recorded by Majors). The test pilot, Bruce Peterson, hit the ground at 250 mph, tumbling six times. He lost use of his right eye and had to stop flying, ending his career. Understandably, Peterson has said that he hated reliving his accident, week after week, courtesy of the show.