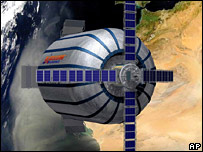 Bigelow Aerospace, run by Las Vegas hotelier Robert Bigelow has successfully launched an unmanned rocket (a converted ICBM) from Russia and deployed, 340 miles above the Earth, a prototype of its space-living habitat known as Genesis. Genesis is crafted in kevlar and is inflatable. The company successfully inflated the structure, which is almost like a dirigible or airship, today.

The company hopes to begin space tourism within 5 years.

Here is a timeline:

// posted by neurofuture11:12 AM permanent link