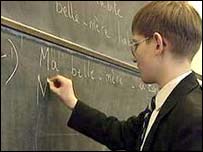 
The French and Hindi 'd' sounds were played to participants

Gifted linguists could have a different brain shape and structure from those of other people, a study suggests. Neuroscientists at University College London say they have more "white brain matter" in a part of the brain which processes sound.

Their brains could also be less symmetrical than others.

It is hoped the research, published in the journal Cerebral Cortex, could be used help to identify reasons for language difficulties.

Those involved in the trial - all native French speakers - were asked to distinguish between two similar sounds from different languages. The first was the "d" sound found in their own language which is made by placing the tip of the tongue against the top teeth. The second was a "d" found in Hindi, which is pronounced by curling the tongue upwards towards the roof of the mouth.

Both types of d were followed by the letter a, so the participants heard "da".
The differences between the sounds are heard in the first 40 milliseconds.
Researchers tested the speed at which participants could process the information.