Marilyn Elias of USA Today writes on exercising our brains:

How to save your brain: Start immediately
By Marilyn Elias, USA TODAY
Knowing they'll need a nest egg for later years, sensible middle-aged adults may put their stockbroker on speed-dial and keep 401(k) updates handy. 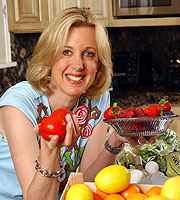 
But how about building a "cognitive reserve" account their brain can draw on at older ages when memory problems are most serious?

It's more than just a clever idea. Animal studies and rapidly growing human evidence suggest that adults might be able to delay or prevent severe cognitive decline, says Molly Wagster, who directs research on normal brain aging at the National Institute on Aging. "There are no guarantees yet, but it's really looking like some of these things could work."

Possible resources for the brain include:

• Antioxidant-rich foods such as blueberries and spinach.

Cutting-edge research on the payoffs of planning ahead for people who may live to be 80 or longer will be reported at the American Psychological Association meeting starting today in Washington, D.C.

"We've been surprised to find out how malleable the brain is," says psychologist Randy Buckner of Washington University in St. Louis.

The evidence that mentally challenging lives boost brain power comes from large, worldwide samples of people who have been followed over time. Scientists compare those who maintain good mental function with those who don't. Very few controlled clinical trials have been done, so conclusive evidence on preventing dementia does not exist.

"What we have is fairly compelling and worth paying attention to now," says neurologist David Bennett of Rush University Medical Center in Chicago. "Don't wait till you're 80."

His long-running study of Catholic nuns, priests and brothers shows that the more formal education a person has, the more amyloid plaques — clumped protein fragments typical of Alzheimer's — it takes to produce a given level of memory impairment.

"This doesn't mean you should quit your job and go get a Ph.D," he says. "Education probably relates to how you use your brain throughout life — your job and leisure activities that stretch the mind."

Additionally, the more plaques seen at autopsy, the bigger the difference education made on the person's cognitive test scores.

Just keeping busy seems to tune the brain, suggests neuropsychologist Yaakov Stern of Columbia University College of Physicians and Surgeons. Stern followed about 1,800 older adults for up to seven years. The more leisure pursuits they engaged in — even just visiting friends, playing cards or going to the movies — the lower their risk of developing Alzheimer's. From the start, he accounted for scores on memory tests, strokes, high blood pressure, diabetes and other health limitations to make sure poor health or memory weren't the causes.

"I'm convinced they have resources that provide a reserve," Stern says.

Adults who lead stimulating lives may develop more neurons, more connections between neurons or more efficiency in using their brain cells so they need fewer, Bennett says. They also may create needed detours around brain blockages in response to the demands of daily life, much in the way a commuter is able to find quicker routes home. Bennett's team is now counting neurons and the links between neurons in brains of deceased study participants to shed more light on what's happening.

Keep Your Brain Young, by Guy McKhann and Marilyn Albert

Mental and social stimulation are not the whole story in preserving brain function. There's evidence that aerobic exercise is beneficial.

Walking 45 minutes three times a week for six months significantly improved mental ability of older adults with no dementia; a randomly selected control group that did stretching and toning had no change, says study leader Arthur Kramer, a psychologist at the University of Illinois.

Brain scans taken before and after show growth in two regions of the walkers' brains that typically shrink with aging and work less efficiently. "They looked two to three years younger in brain volume after six months," Kramer says.

Nobody knows exactly why aerobic exercise affects the brain. In animal studies, exercise increases proteins that multiply the connections between neurons and even prompt the birth of new brain cells. Aerobic activity also improves the functioning of chemicals that help neurons to communicate with each other, Kramer says.

And exercise helps brain function by reducing blood pressure and the risk of diabetes.

Add diet to the mix

Brain scans taken before and after show participants have more efficient cell activity in a part of the brain that controls everyday, or "working" memory, Small says.

One of his success stories is 46-year-old Michele Rubin of Beverly Hills, who scored average on memory for her age at the start but scored average for a 20-year-old after the program.

"A few years ago, I started feeling like I wasn't as sharp as I used to be, she says. "I was forgetting things. I'm very busy, but I basically did nothing for myself — not reading, not taking care of my mind was just part of it."

Rubin calls last fall's program "life-altering." She started going to a gym, eating a lower-fat, more nutritious diet, using memory strategies and reading serious non-fiction. She's buying crossword puzzles at the airport now and forcing herself to help the children with algebra. "I feel like I'm stretching my mind, and I'm remembering more," she says.

Rubin also won't take phone calls at her busy home when many others are in the room and she's apt to be interrupted. She goes into her home office. "I wasn't concentrating, so I'd forget things ... I feared I was about to be committed to some old-age home. Now I feel much better about myself."

That sense of control alone could bode well for staying mentally fit. Adults who believe mental decline is not inevitable as they age are much more likely than fatalists to use helpful strategies on memory tests, says Margie Lachman, chairman of the psychology department at Brandeis University.

"Anybody who uses these strategies would do better," she says. Her lab tests adults 25 to 85 years old. "Over 40, beliefs make more of a difference in test scores. Older adults with negative beliefs just give up quicker, they don't persist, and they don't do as well."

Even as many pine for their youthful brains, they may not be needed to function well at 70. Brain scan studies show that mentally sharp older people more often recruit different areas of their brains than younger adults to do the same mental task, says cognitive neuroscientist Roberto Cabeza of Duke University.

"The older brain can reorganize to cope with changes," he says.

It's not even hopeless for sedentary people in their 70s. University of Illinois psychologist Denise Park conducted an eight-week program teaching digital photography or quilting to elderly adults. On completion, they improved significantly on mental ability tests, compared with a control group that did nothing new.

The potential for preventing or delaying dementia by building brain reserve earlier in life is tantalizing, Park says.

Population studies show that 40% to 50% of people older than 85 have Alzheimer's disease, according to Rush University Medical Center epidemiologist Denis Evans, who specializes in the disease. About 76 million baby boomers are headed there.

"Even very modest delays of mental decline could have a huge impact on public welfare," Park says.