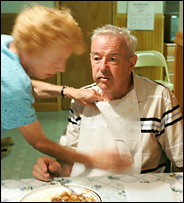 Alzheimer's can have a dramatic and personal impact on lives and families. While it is hard to comprehend the scope of life-change, even for those of us who are close to its toll on a daily basis, it's clear that people helping each other and family strength and support are essential. Daily assistance for caregivers - giving of time is perhaps even more important than a financial commitment. If the primary caregiver can have a few hours for friends, favorite activities, or a hobby through your helping intervention, we urge you to take that step

Article below from The New York Times by Jane Gross

After his retirement as a New York City carpenter four years ago, and before he faded into the incoherent fog of Alzheimer's disease, Christopher Dillon and his two grown sons renovated a bathroom in the basement of the family's Queens home.

It would be the last multigeneration home-improvement project for the Dillons. But the tiny room with its stall shower would soon become center stage in a family's determined effort to care for a failing loved one at home.

Giving Mr. Dillon, 66, a shower is unbearable for his wife, Kitty, 63, despite her long experience working in a nursing home. She has only to lay out towels, washcloth and soap and Mr. Dillon becomes agitated, sometimes shoving her or pulling her hair, she said.

So the task falls to her strapping boys, Chris, 36, a sanitation worker, and David, 34, a police officer. The National Guard, Mrs. Dillon calls them, riding to her rescue each evening with stores of patience and good cheer that she, as the primary caregiver, feels seeping away.

"It's overwhelming, worse every day," Mrs. Dillon said recently, wincing from stomach pain and steadily losing weight. "I don't have any life. Whatever happened to the golden years? Both of us have been robbed of everything we worked for."

The Dillons' ordeal is familiar to families of the 4.5 million American men and women with Alzheimer's disease, which progressively destroys the cerebral cortex and thus the ability to think, communicate and comprehend. The number of afflicted will more than triple to 14 million by midcentury, according to health care experts and demographers. For their caregivers, life is a round-the-clock vigil, an act of stoic devotion that most families embrace as the antithesis of a nursing home.

"It's a myth that Americans dump their relative in long-term care," said Dr. Peter V. Rabins, a professor of psychiatry at Johns Hopkins University and co-author of "The 36-Hour Day," a groundbreaking guidebook first published in 1981, when Alzheimer's was not yet a household word. "When you look at the numbers, that is simply not the case."

Experts like Dr. Rabins agree that a substantial majority of Alzheimer's patients are cared for at home by family members; estimates range from two-thirds to 95 percent. This growing army of caregivers props up the nation's health care system with free labor, worth, economists and researchers say, more than $100 billion a year, or more than twice the cost of nursing home and paid home care combined.

But these largely invisible caregivers, who buttress the nation's health care system, pay a terrible price. The architecture of the family is turned upside down, turning children into parents and parents into children. Emotional bonds and financial resources are strained, even in the most resilient households. Caregivers get sick from the stress.

A Test of Human Spirit

Alzheimer's disease is "a cataclysm" that "tests the human spirit" of caregivers like no other, wrote Sherwin B. Nuland, a physician and author of the best-selling 1994 book "How We Die," which describes without euphemism the most common causes of death.

With the baby-boom generation aging and life expectancy continuing to increase, Alzheimer's disease has become a ticking time bomb. The fastest-growing segment of the population is 85 and older. In Mr. Dillon's age group, 65 to 74, 3 percent have Alzheimer's; in the 85-and-over group, it is a staggering 47 percent, according to the National Institutes of Health.

But policy makers have ignored the inevitable, Dr. Rabins said. "As a society we're paying no attention," he said. "What you see is the coming together of a medical and social crisis that family caregivers alone cannot solve."

Each family has a different capacity for caring for an Alzheimer's patient, experts say, depending on its size, financial resources, location, competing obligations, social and religious support and approach to conflict resolution. According to criteria established by hospital groups for caregivers, the Dillons would score A-plus on all counts. Still, there are moments when the house seems to vibrate with silent tension.